Did you know that over 1 trillion apps and games have been downloaded from the App Store between the period of July 2008 and Jun 2017 (source: Statista.com).

Or did you know that the most popular Android applications are downloaded more than 1 billion times (Android).

The app market is booming like never before. Mobile app development is becoming a more and more popular medium of software creation and shows no signs of slowing down.

Nowadays a lot of companies opt for their own mobile application in order to make their services accessible to every client at any time of the day.

What does “mobile app development” mean?

Mobile application development is the process of creating software for the most frequently-used devices – smartphones and tablets.

Mobile app development is similar to web application development, but with one key difference: mobile apps are written to take advantage of the unique features of a specific mobile device.

Today, the two most popular mobile platforms are iOS from Apple and Android from Google. Both come preloaded with essential apps, including a full web browser on iOS and the Google Play Store on Android.

According to research made by Dscout, people touch their phones 2 thousand times a day on average. As we all know, mobile devices are designed to be portable and easy to use. This is one of the reasons why mobile owners are the most active users.

According to “Statista”, mobile app revenue is going to face significant growth for the years to come. 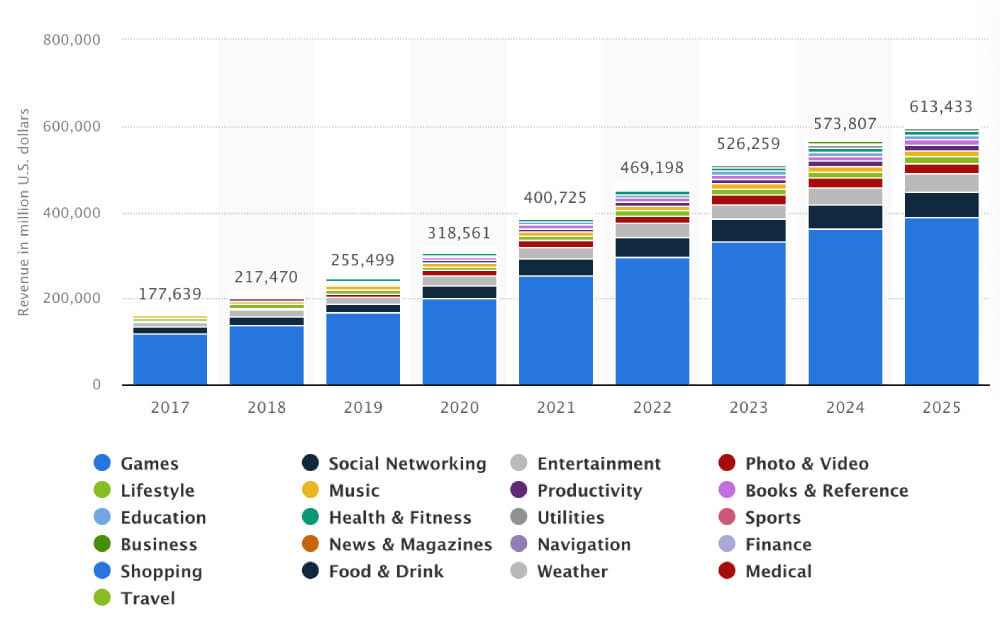 Which Mobile Development Platforms to choose?

When mobile apps first appeared, they had to be written in native code. Today, most mobile apps are developed as device-agnostic applications, meaning that they can perform optimally on any device without the need for specific code for each different device's processor.

Before you begin creating an app, determine which type will best suit your needs.

A native mobile app (Android/iOS) is an application that meets the requirements of a particular operating system by using the SDK of a mobile device. Using a native app enables you to create the customized features you need, but they can be more expensive than other types of apps.

To develop, manage and deploy mobile apps there are mobile development platforms that contain a set of useful tools. Here are the description of the most popular Mobile Development Platforms:

iOS SDK is a “branch” of Apple Xcode. This software development kit allows for the development of mobile apps on Apple’s iOS. iOS SDK is made for people looking for a truly native Apple application and it is quick while editing even the largest files. There are no doubts, App Store can be a growth engine for your business.

Is the world’s most popular mobile platform. Preinstalled on hundreds of millions of Android devices around the world, Android gives you a world-class platform for creating native applications and games, as well as an open marketplace for sharing your apps to Android users.

Xamarin is a C#-based platform that allows users to develop and maintain iOS, Windows and Android apps using one code base. Xamarin contains powerful tools and it is used especially for large projects. The code is executed on the .NET platform and after compiling, returns the standard code for iOS and Android.

Unity plays a significant role in the global games market, as 34% of top mobile games are Made with Unity.

PhoneGap is a free open-source platform. This platform contains a whole library of plugins and allows developers to build cross-platform applications (Android, iOS, Windows Phone and webOS) with a single codebase.

Applications developed using Apache Cordova are considered to be hybrid mobile apps, which means that they are built with a combination of web technologies, HTML, CSS, Javascript languages and it allows you to use any web-native framework. Layouts rendering is done via Web views, but they are not just web apps and have access to native device APIs. Therefore, if you decide to develop hybrid applications, you should know that developing with Cordova is like developing a web page.

Ionic is an open-source framework for hybrid mobile app development, in fact it is one of the most popular hybrid frameworks that is currently in use because it is focused on developing apps for modern web standards and for modern mobile devices. It is considered to be the app platform for web developers.

Ionic is created on top of Cordova, but the key thing about it is that recent releases are built on AngularJs, which makes the framework work faster.

React Native, developed by Facebook, lets you build mobile cross-platform apps writing only JavaScript, while the UI is fully native. It has the same design as React, letting you compose a rich mobile UI from basic components.

ReactNative is still in the development process and we are yet to see more great things about it.

Controlling your app’s performance is pretty simple with Appcelerator. What’s more, Appcelerator is one of the best options in case you opt for a hard-based app.

Appcelerator’s mobile platform has a huge library of app extensions in its module marketplace and contains pre-integrated cloud services.

Thanks to Appcelerator, developers can create apps for platforms like iOS, Android, and BlackBerry, plus, it also supports HTML5 and hybrid apps.

There are plenty of technologies you can use for a specific platform to create mobile applications, let me give you a brief description of the most popular programming languages for mobile apps development.

Swift is a programming language developed by Apple Inc. Swift is an alternative to the Objective-C language that includes modern concepts and has a simpler syntax, minimal coding.

Java is an object-oriented programming language. It is the “official” language for Android development. There are many open-source libraries for Java. Actually, Java is used for many different types of programming projects such as mobile applications and desktop web applications.

If you want to develop web-frontend applications for mobile devices then HTML5 is the language to seek. It reduces costs and complexity, but it comes with some issues, including accessing data and native application program interfaces (APIs).

Php is the best option for apps that need database integration. Maintaining PHP-based apps is not difficult as there is no need to wait until the updated version, because the updates can be achieved through bug fixes. Php has a protected architecture for the mobile development need.

Generally speaking, mobile devices and digital content have become an indispensable part of everybody’s life. That’s the reason why many companies strive to generate new app ideas in order to increase their revenue.

We hope you found this article useful for you.

Do you have a great app idea burning in your head? Check out how we can implement your ideas creating amazing apps for you.

Schedule free 30 minutes call with us

Schedule a free 30 mins call with us l and learn how we can really make a difference!